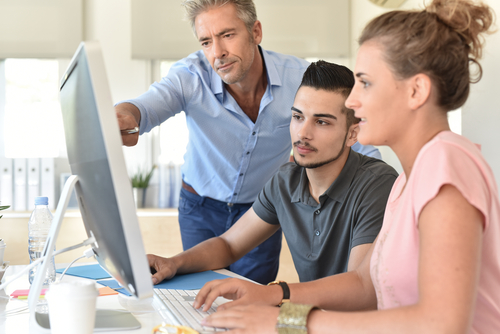 Work based training over the 15 years I have been involved in the arena of Government funded training has undergone many changes.

In the first couple of years the common program was funded under the Train to Gain Banner as part of the drive to enable staff to gain a level 2 NVQ in line with thinking of the Government of the time.

The intention was good, however there was no mandatory requirement to undertake numeracy and literacy qualifications and the qualification was mainly an assessed qualification-so no new skills just recognition for those people already had.

There were quite a few positive outcomes for learners, however it was very profitable for some providers especially those that took the 50% of funding at sign up and then just shut up shop.

When this was disbanded funding got diverted into Apprenticeship training, this was predominately used for young people entering employment as at the time we had a large NEET problem.

A small amount was used for older learners already in employment and changing job roles and apprenticeship training was used to support this.

There was at this stage no minimum length of apprenticeship requirement and again some providers cut corners and they were pumping learners though in 3 months where they were coming out without real skills, after being in flimsy jobs.

They removed this loop hole by making apprenticeship length a minimum of 12 months and 1 day and making numeracy and literacy mandatory for those without the necessary qualification.

However we still had a apprenticeship that was mainly based on assessment, funding for a lot of these qualifications often came from Primes (main contract holders often Colleges or the larger providers) who then top sliced the funding for doing nothing.

Hail a new dawn in April 2017 new apprenticeship standards and funding were introduced, which required a longer length of apprenticeship, proper training which was externally tested and assessed by independent End Point Assessors.

The funding for some went directly to employers and Primes had a lot more obligations on funding.

There is also a requirement that 20% off the job training is included which doesn’t mean away from the workplace but does allow for time to be devoted on working on the work necessary for the apprenticeship.

So, you would think that all would be well?

There has a big dip in apprenticeship take up-why I think a decline in the number of young people and organisations taking time to understand all the changes and work to decide the best way to use these new apprenticeships.

And now a big blow just as everything is slowly moving forward they are looking to cut the funding.

This will remove the provider having the means to customise programs and deliver to the highest level-yes apprenticeships will be still delivered but giving the same high value I am not sure.

So I hope this doesn’t happen we need value not cheapness.

< Back to all posts

You can find out more about which cookies we are using or switch them off in settings.

This website uses cookies so that we can provide you with the best user experience possible. Cookie information is stored in your browser and performs functions such as recognising you when you return to our website and helping our team to understand which sections of the website you find most interesting and useful.

Strictly Necessary Cookie should be enabled at all times so that we can save your preferences for cookie settings.

If you disable this cookie, we will not be able to save your preferences. This means that every time you visit this website you will need to enable or disable cookies again.